COFACE POSTS 2014 RESULTS IN LINE WITH OBJECTIVES AND PROPOSES DISTRIBUTION OF €0.48 PER SHARE

(Variations in % expressed in comparison to results at 31 December 2013)

“We are pleased to publish full-year results in line with our expectations. Coface has once again demonstrated the pertinence of its profitable growth model this year. Our innovative product offering, appropriate distribution channels, extensive international presence and prudent risk management have all contributed to the significant improvement in our results.” 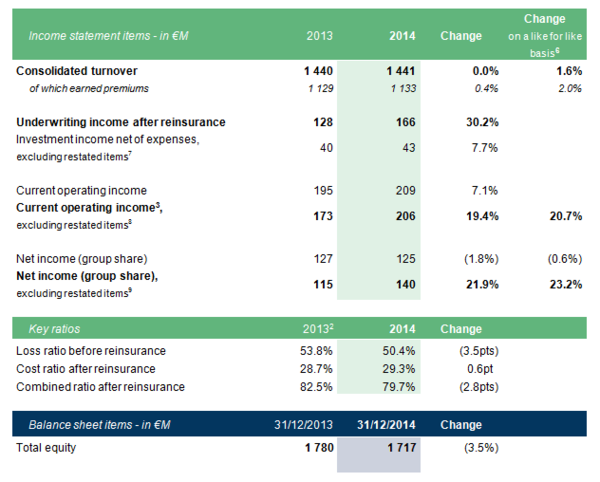 In 2014, Coface registered consolidated turnover of 1441 million euros, up 1.6% compared with 2013[1] (stable at constant scope and exchange rates), in line with objectives communicated by the Group in June 2014 at the time of its stock market introduction.

The positive commercial dynamic which began in 2013 is demonstrated by an increase of 7% in new contract production compared with the previous year, and a solid client retention rate[2] of 89.2% (vs. 86.8% in 2013).

These good results were achieved in a context of competitive pressure in historic credit insurance markets, and are explained by Coface’s strong position in emerging markets and in North America, regions which are contributing most to the Group’s development.

Throughout the year, Coface implemented its commercial strategy around three major axes: innovation, the deployment of a multi-distribution model, and geographic expansion.

The Group also extended its global footprint. Coface obtained three new licenses, allowing it to sell credit insurance policies directly in Columbia (January 2014), in Morocco (December 2014) and in Israël (January 2015). Two commercial representation offices were opened in the Philippines and in Kazakhstan, and a new partnership agreement signed in Serbia.  Coface also strengthened its presence in North America, increasing the number of its distribution agents (+50%) in the US.

Key to Coface’s strategic refocusing begun in 2011, risk management remains a priority for the Group. At the end of an economically lacklustre year, Coface registered a net loss ratio after reinsurance of 50.4%, a decrease of 3.5 points compared to 2013.

Internal overheads remained at the same level over the period and the cost-ratio was quasi-stable (+0.6 points2) at 29.3%.

Overall, the net combined ratio was down 2.8 points to 79.7%, in line with forecasts.

Coface issued subordinated debt of €380 million in 1Q, enabling it to strengthen its regulatory equity and optimise its capital structure.

The ratio of economic capital coverage necessary to cover insurance and factoring risks stands at  144%12, quasi stable as compared with 201313.

In December 2014, ratings agencies Fitch and Moody’s confirmed the IFS ratings that they attribute to the Group, respectively AA- and A2, stable outlook.

2014 saw the anticipated improvement in the economic environment. However, this slow and laborious recovery has not yet enabled the numerous areas of fragility around the world to be cleared up, whether these are countries, sectors or companies in difficulty.

In this more favourable, yet demanding, context, Coface’s business model demonstrated its strength in 2014 and will enable the Group to meet the challenges of 2015 with the required vigilance:

These elements constitute our strategy to ensure Coface continues to progress on its path of growth and profitability.

1 Distribution taken from « issue, merger and transfer premiums », subject to approval by the Annual General Meeting of shareholders on 19 May 2015.

4 Change at constant scope and exchange rates. Current operating income including finance costs is restated to exclude the following items: cost of moving (€8.3M) and outsourcing of capital gains (€27.8M) at 31 December 2013, interest charges for the hybrid debt (€12.1M) at 31 December 2014.

5 Change at constant scope and exchange rates. Net income group share is restated to exclude the following items: cost of moving (€8.3M) and outsourcing of capital gains (€27.8M) at 31 December 2013, interest charges for the hybrid debt (€12.1M), charges linked to the IPO (€8.1M) and charges linked to the creation of Coface Re at 31 December 2014. A 2013 normalized tax rate has been applied to these elements.

6 The change on a comparable basis is calculated at constant scope and exchange rates. Scope effect is linked to the disposal of the public guarantees activity in Brazil (SBCE subsidiary) in 3Q 2014.

8 Current operating income including financing costs is restated to exclude the following items: cost of moving (€8.3M) and outsourcing of capital gains (€27.8M) at 31 December 2013, interest charges for the hybrid debt (€12.1M) at 31 December 2014.

10 At constant scope and exchange rates.

13 After taking into account the issue of €380M of subordinated debt and the distribution of a special dividend of €227M.

DISCLAIMER -Certain declarations featured in this press release may contain forecasts that notably relate to future events, trends, projects or targets. By nature, these forecasts include identified or unidentified risks and uncertainties, and may be affected by many factors likely to give rise to a significant discrepancy between the real results and those stated in these declarations. Please refer to the "Disclaimers" section on page 2 of the Coface Group's Base Document registered by the AMF on 6 May 2014 under number I.14-029 in order to obtain a description of certain major factors, risks and uncertainties likely to influence the Coface Group's businesses. The Coface Group disclaims any intention or obligation to publish an update of these forecasts, or provide new information on future events or any other circumstance.