However the growth in the Emirates remains dependent on hydrocarbon revenues, mainly those of Abu Dhabi, despite an active policy of economic diversification. This leaves the country vulnerable to the changes in global economic trend as the latter has an impact on the production and prices of hydrocarbon products.

The reason of Dubai World’s default in 2009 was mainly the burst of a property bubble resulting from an over - development of high-end luxury projects relying too much on foreign capital. Since then the country has completed an important part of the debt restructuring. In February and March 2014, Dubai managed to refinance favorably its debt maturing this year (around 20 billion USD) with Abu Dhabi and the UAE central bank.

Today’s question is whether the country will see a renewed property price bubble amid the increasing number of new real estate launches in Dubai and the rising housing prices in some areas back to near pre-crisis level. 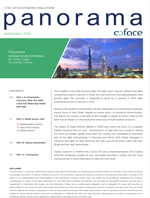