Although worldwide growth continues to recover,its rate will not exceed 3% for the fourth year in a row. The advanced economies are doing much better: Activity in the USA  rose significantly in the 2nd quarter (2.5% forecast for 2015), thanks to both consumer spending and investment, and in the Eurozone (1.5%) the gradual upturn in activity continues

The emerging countries (forecast growth of 3.5% in 2015, 4.2% in 2016) are overshadowed by the weakness of raw material prices and the fall in exchange rates against the dollar. In a number of the larger emerging countries, activity slowed down (China, Turkey, South Africa) or went into recession (Russia and now Brazil). The recent Chinese stock market collapse and its consequences on raw material prices have only intensified these weaknesses. According to Coface, the country risk in the emerging countries will remain a major point of vigilance this year.

In this context of a worsening macroeconomic situation in the large emerging countries, Coface is signalling a rise in the level of risk in several smaller countries.

Latin America: the assessments of four countries downgraded by one notch

Latin America (forecast of a 0.2% recession in 2015) underwent a new wave of downward revisions in assessments. 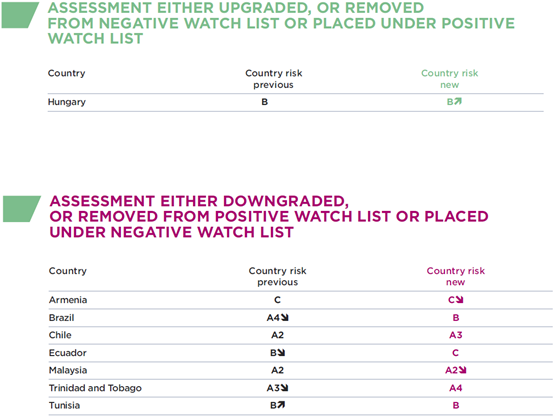