Unless otherwise stated, changes are in comparison with results at 30 September 2014
Published results for 2014 have been restated to take into account the impact of IFRIC 21

“Coface once again posts an increase in turnover this quarter. In spite ofa difficult economic climate in certain emerging markets, we have managed our loss ratio well by applying our expertise in risk management. In doing so, we are pursuing our path of profitable growth while protecting and supporting that of our clients.”

The Board of Directors of Coface SA examined the summary consolidated financial statements for the first nine months during its meeting on 2 November 2015. They were subject to review by the Audit Committee. 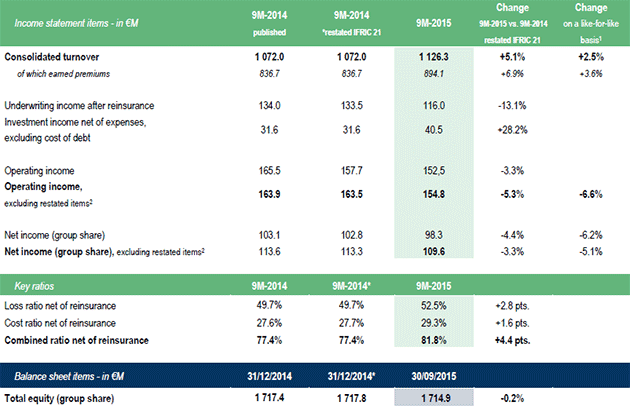 For the first nine months of 2015, consolidated turnover reached €1 126.3M, up 5.1% compared with the first nine months of 2014 (+2.5% at constant scope and exchange rates).
New policy production remains healthy, taking into account that 2014 was marked by the signing of some significant contracts. Our client retention rate is good.
Price pressure, linked to competitive pressures and the sound profitability of contracts in maturing markets, is under control: at 30 September 2015, the contract price effect is -2.4%, stable compared with the situation at 30 June 2015.

Emerging markets are driving the Group’s turnover. In the other regions – mature markets where competition is fierce – the implementation of Coface’s new commercial strategy involves deep structural changes whose effects will only materialize over time.

Our rigorous risk management allowed us to stabilize the loss ratio despite a worsening economic environment in emerging markets. The loss ratio stood at 52.5% for the first nine months of 2015, in line with the end of the H1 2015 (+0.5 point). Proactive and selective in its risk management, Coface continues to adjust its cover of the most fragile companies and sectors in order to preserve its profitability and that of its clients. The effects of this approach materialize gradually, depending on observed payment behavior.

In July 2015 Coface announced it was studying implementation of an operational efficiency plan with the aim of reducing its cost structure.

This initiative is consistent with the Group’s Strong Commitment plans I & II and will cover all of the Group’s countries and functions. Through this project, Coface is examining all possible means of optimizing costs. The design of the plan is currently underway and Coface will present its main axes before the end of 2015.

Rating agencies Fitch and Moody’s reconfirmed the Group’s ratings (IFS) at respectively AA- and A2 (stable outlook), on 17 September and 13 October 2015.

Work by Bpifrance to integrate Coface’s public guarantees activity is on-going. The effective date of the transfer has not yet been specified.

Coface will continue to be remunerated by the French State until transfer of the activity is effective.

In 2015, Coface expects world growth to be below 3%. The advanced economies are experiencing a weak recovery and certain large emerging economies continue to register disappointing growth or are in crisis, which threatens to have a knock-on effect on other economies.
In this economic climate, Coface will maintain its policy of disciplined underwriting and selective risk management.

NOTES
1 Constant scope and exchange rates. Published results for 2014 have been restated to take into account the impact of IFRIC 21.
2 See annex below, "Reconciliation Table", for the calculation of operating income excluding restated items. For the calculation of net income (group share), a normalized tax rate has been applied to restated items for 9M 2014 (30 September 2014) and 9M 2015 (30 September 2015) respectively.
3 Internal overheads are restated to exclude charges linked to the creation of Coface Re (employment costs, rental costs and others) (-€0.7M) for 9M 2015.
4 Investment income net of expenses, excluding cost of debt 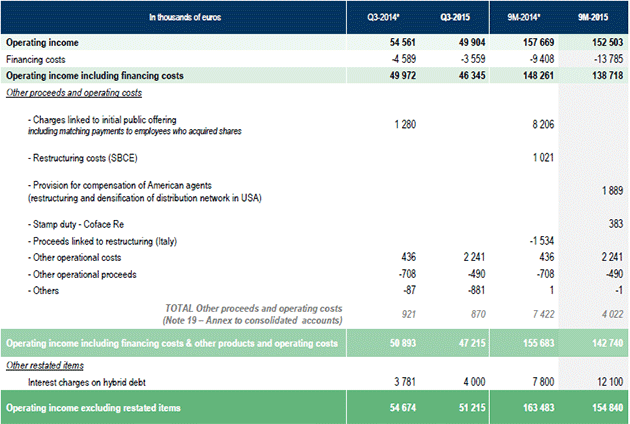