China-Africa: Will the marriage of convenience last?

Wolf Warrior 2, released in July 2017, became the first non-Hollywood movie to break into the top 100 highest-grossing film of all time at the global box office. The action movie portrays China as Africa’s protector. Just four days after the release of the movie, China opened its first overseas military base on the coast of Djibouti, embodying the message of the movie. China has demonstrated a particular interest in Djibouti, a small country in the Horn of Africa, as a gateway to the continent, especially since the first Forum on China-Africa Cooperation (FOCAC).

As its name suggests, FOCAC embodies and oversees Beijing’s interest in the entire continent. Since the first Forum was held in 2000, the upturn in economic cooperation between the Middle Kingdom and the African continent has transformed China into a key economic partner for many African countries. However, closer bilateral ties between China and most of its African partners remain centred around China’s growing demand for commodities – particularly mineral resources such as oil, metals and precious stones – and has become subject to increasing scrutiny. Nevertheless, almost 20 years after the inception of FOCAC, it has become necessary to reassess the China-Africa relationship. China’s economic rebalancing towards more domestic consumption is underway, and the slowdown in economic activity is apparent already, despite some signs COFACE ECONOMIC PUBLICATIONS ALL OTHER GROUP PANORAMAS ARE AVAILABLE ON www.coface.com/Economic-Studies-and-Country-Risks of strength in 2017. This should translate into weaker Chinese demand for mineral resources and lower commodity prices – starting with those of crude oil – both of which are lingering tendencies that will reshape the China-Africa bilateral relationship. Declining trade between the African continent and the Middle Kingdom, as well as the shrinking outward foreign direct investment (ODI) flows in the past two years, further reinforce this trend.

This drop in demand will not affect all countries in the region equally. Those which benefited the most from China’s expansion are expected to feel the impact more strongly. For this study, we deployed an export dependency index to identify the main pockets of risk. It is scaled from 0 to 1, where higher scores indicate more exposure to disruptions of trade with China. Our results suggest that dependency on China across the continent has increased significantly between 2006 and 2016. To put this into context, Sub-Saharan Africa’s commodity export dependency on China was 0.24; higher than the 0.07 registered in the EU-28 and 0.12 in the United States. Moreover, Sub-Saharan Africa still displays a much higher incidence than its emerging market peers in Asia and South America. Not surprisingly, we found that large exporters of oil (Angola) and metals (Zambia, South Africa) are most at risk to potential shifts in Chinese demand. These countries have also benefited from more inflows of Chinese ODI and lending.

However, in spite of the overall deterioration in export dependency on China, the latest developments do offer a glimmer of hope. Agricultural commodities (South African oranges, Ethiopian sesame, Senegalese groundnuts or Mozambican tobacco) and wood products (Mozambique, Nigeria, Equatorial Guinea, Cameroon, Ghana) - which could potentially benefit from China’s rebalancing of its growth model - have emerged as small, but welcome, additions to Africa’s export basket to China. Moreover Chinese ODI and lending has started to diversify away from the extractive sectors, focusing more on manufacturing, utilities and services. However, like in every good marriage, a healthy dose of scepticism is always warranted. ODI and lending flows do not compare to trade flows in terms of value – in fact, they are one order of magnitude smaller. This means that African countries with high dependency levels on China remain very exposed to a steeper correction in Chinese demand or a return of lower commodity prices. At the same time, talks of relocating «The Factory of the World» to African countries are dampened by the stubbornly low export volumes of manufactured articles to China. 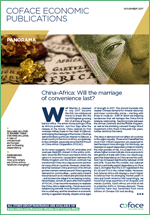 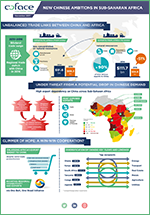 Download this publication : China-Africa: Will the marriage of convenience last? (2.05 MB)