Clash of the Titans: China’s rise fuels competition with Japan’s interests in Asia

China has undoubtedly modelled itself as the new champion of globalisation. Nowhere is this felt more strongly than in Asia. Since its accession to the World Trade Organization (WTO) in 2001, the country has positioned itself at the core of the world’s most important supply chains, rapidly becoming the largest trade partner for many Asian economies. More recently, the intensifying rhetoric surrounding China’s Belt and Road initiative1 – aimed at boosting investments in infrastructure and beyond – has led observers to neglect the role played by another regional powerhouse: Japan. Although China may be king in terms of trade, it is considerably behind Japan in terms of investment. But fears surrounding China’s hegemonic dominance in Asia Pacific (APAC) may have been overplayed: Japan remains a key player in this sphere, and will continue to be so for the foreseeable future.

However, a closer look at the evolution of trade and investments reveals that the two countries’ are becoming competitors in the region. Japan and China are net commodity importers from Asia. More importantly, they both import significant amounts of mechanical and electronic parts and components, which are processed into higher value-added goods for export, owing to the important role that both countries play in the global electronics supply chains. Not surprisingly, the top three exports to Asia for China and Japan are exactly the same: electrical machinery and equipment, machinery and mechanical appliances, and steel products. Their production structures are therefore becoming increasingly similar. This has led China to refocus its investments, moving away from mineral resources and towards manufacturing. Increases in Chinese investment in the Asia-Pacific region may eventually pose a threat to Japanese corporate interests.

1 - Formerly known as the “One Belt, One Road” initiative 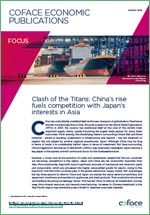 Download this publication : Clash of the Titans: China’s rise fuels competition with Japan’s i... (1.29 MB)