Tentative signs of improvement in sector risks in Europe

Nil growth recorded in the eurozone in Q2 2014 confirms the scenario of an exceptionally slow recovery. However, according to Coface's forecasts, in 2014 growth in GDP will be positive, estimated at 0.9% after a contraction of -0.4% in 2013. This trend is illustrated by a first improvement in the assessment of a sector risk which has long been considered as "very high" -the automotive and metal industry sectors.These now join the category of "high” risks.

Ten consecutive months of rising car sales have benefited parts manufacturers, and the market has become more dynamic in Germany, the UK and Spain. This recovery benefits the metal industry sector, where the sales and profitability of companies have greatly improved. However, although investments are picking up, the sector remains greatly handicapped by persistent overcapacities.

Coface maintains the assessments of the twelve other Western Europe sectors, which continue to post a "high" or "medium" risk. Despite this stabilisation, in contrast to North America and emerging Asia, no European sector has yet reached a risk level that can be considered as "moderate".

Buoyed by balanced growth and dynamic consumption, North American companies have a stable outlook, despite the difficult weather conditions in Q1 2014. The majority of sectors remain in the "medium" risk category.

The outlook is positive for theautomotive industry, which still has a comfortable financial foundation and sales increased by 4.6% at the end of July 2014, over one year. The dynamism of the automotive industry offers outlets to companies in the chemicals sector. In fact, their profitability increased by close to 12% at the end of June 2014, over one year, due to access to cheaper energy and raw materials.

Emerging Asia: paper-wood and construction sectors downgraded by a notch

Contrary to Western Europe and North America, where risks are tending to stabilise, emerging Asia is following a reserve path, despite sustained growth in China and India. Due to the process of consolidating overcapacities currently underway, stocks are accumulating and company debt is increasing.

The metal industry has seen steel prices fall. It is the only Asian industry to be assessed as a "very high risk" sector since last April.

The deterioration of sector risks continues in construction and paper-wood. Construction, threatened by weakened demand, more severe credit conditions and the appearance of ghost towns in China, moves from “medium” risk to “high” risk. The increase in insolvencies of SMEs in the paper industry, combined with overcapacities, leads Coface to downgrade the risk in the paper-wood sector to "medium". 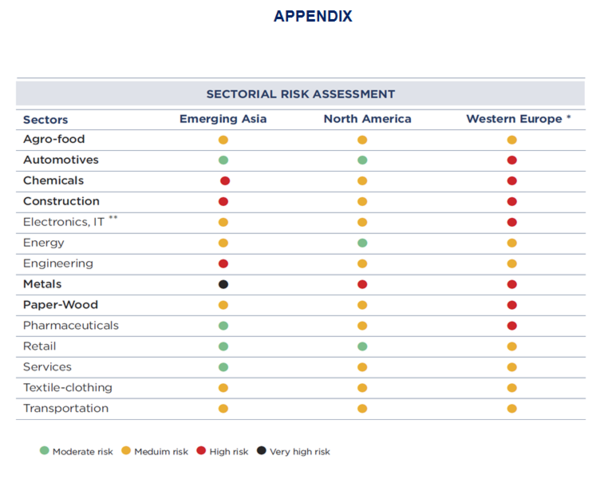