France: will the organic agrofood sector be forced to abandon its principles?

The agrofood industry is facing a number of challenges in Europe1 , including the central issue of how to share created value. To meet these challenges and consider ways to guarantee a healthy, safe and sustainable food supply, the French government held a General Assembly on the topic of food from 20 July to 30 November 2017. Expanding the organic sector of agricultural production seems to be one of the best ways to achieve this, as this market is booming both in France and around the world. France is the third-largest market for organics in the world (Eur 5.9 billion in 2015, or 7% of the total market; Coface estimates that it is likely to reach Eur 8 billion in 2017), behind the United States (40 billion in 2015 or more than 40% of the total market) and Germany (11%), and just ahead of China, Canada and the other major European economies.

However supply in France seems to be struggling to keep up with this burgeoning demand, and 29% of these products are imported. This imbalance might lead one to think that few businesses in France have converted to organic. And yet, our study found that companies in the sectors that have embraced organics are more robust than the rest. According to our model, a 10% increase in the share of organics in total production for a sector, is associated with an 11% decrease in insolvencies for companies in that sector.

In light of this, increasing yields, through innovation and/or expanding areas used for organic agriculture, is a key issue. Another important question relates to distribution through established specialised stores, which, in the face of increasing competition, may be forced to restructure. The market for organic products is a considerable source of growth, and mass retailers are going beyond launching their own brands of organic products and are now opening fully organic stores in response to the market share gains made by specialised distributors since the beginning of the decade. Also at issue is whether the market will finance the sector considering the changes to public subsidies maintenance for organic crops. Ultimately, the booming demand for organic products will inevitably result in changes to the sector, which may be interpreted either as an adaptation or as an abandonment of its principles. 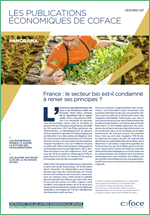 Infographics - French organic food sector: how can it increase scale without abandoning its original principles?

Download this publication : France: will the organic agrofood sector be forced to abandon its prin... (590.83 kB)


Panorama - France: will the organic agrofood sector be forced to abandon its principles?