Morocco: the challenge of becoming an emerging economy

Moroccan economy remains resilient during the last world economic crisis and was able to resist to Arab springs. In an increasingly unstable International environment, Morocco remains stable. Implementing an original development model, the country succeed the challenge to accelerate its potential growth when the major big emerging markets slow down.

The bet that morocco attempts to meet is not only to develop its traditional sectors, but also diversify its activity towards products and services with higher added value. The country intends to attract more foreign direct investment (FDI), becoming a crossroads between the European Union and the African continent, and enhance its economic relations with Sub-Saharan countries.

These developments suggest that Morocco could in the near future, regarding Colombia or Peru, join the group of the “new emerging countries”.

However, this optimism should not hide some persistent fragilities, in particular substantial twin deficits and public debt from several years. 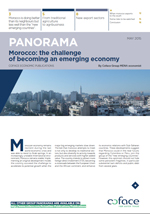 Download this publication : Morocco: the challenge of becoming an emerging economy (382.02 kB)